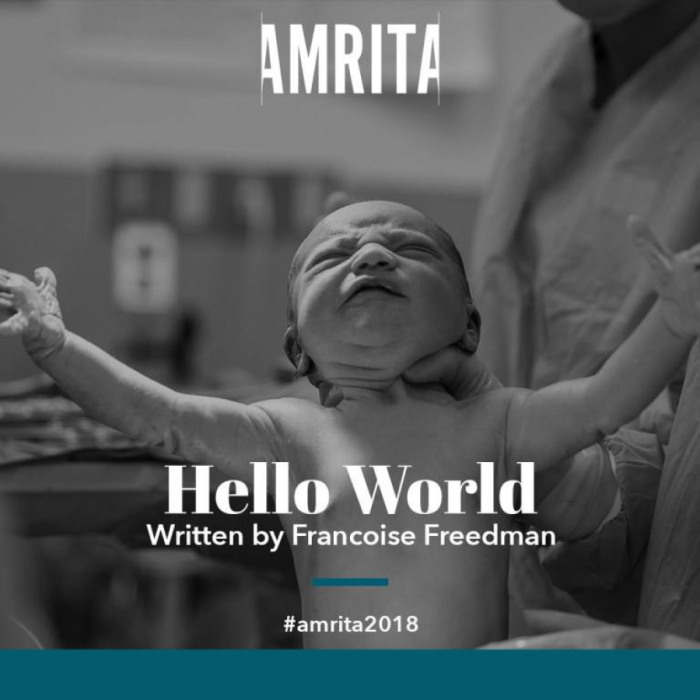 This article was written by Francoise Freedman for the 4th issue of Amrita Magazine. It was published by Yoga Alliance Professionals at: http://yogaallianceprofessionals.blog/amrita/hello-world-yoga-practice/

"It is now over 60 years since the London doctor Grantley Dick Read wrote his pioneering book Childbirth Without Fear, which inspired the Natural Childbirth movement all over the world. The book paved the way for the Lamaze method and Leboyer’s reminder that birth is also about the baby’s experience. Since then obstetrics was changed radically by the invention of epidural anaesthesia: this revolutionized the availability of pain relief in childbirth, enabled a more controlled ‘management of labour’ and facilitated caesarean sections. No one could have predicted the spread of IVF and reproductive technologies that are helping more and more couples to have babies of their own. In parallel with these changes, yoga has become the exercise of choice in pregnancy. Most pregnant women who attend yoga courses are new to yoga. Even for experienced yogini, pregnancy and yoga are linked in the most miraculous and at the same time terrifying transformations of their bodies and minds as women become mothers, most specially for their first births. At this crucial but vulnerable time, the eight spokes of the wheel of yoga need to come together for self-empowerment, self-centring (with the support of friends) and the creation of long-term foundations for women’s health and wellbeing post childbirth.

Yoga is for everyone, with the Hippocratic principle of ‘do no harm’ as the first and foremost mandate for yoga pre-and post-natally. Given that the popular image persists of yoga as mainly a set of postures, the focus of much of yoga for pregnancy today is the safe teaching of Asana, resulting in lists of do’s and don’ts and red crossed images of this or that posture all over the internet. But are we forgetting the breath awareness at the core of therapeutic yoga and the source of feel-good effects on our neuro-endocrine system? Certainly, this is never more important than during pregnancy, when each breath can create a bridge between physical and spiritual experience. We love the sight of beautiful round ‘bumps’ and ‘tums’, but how is the experience of growing a baby inside? If the number one goal of yoga is to promote women’s health and contentment through the many changes that their bodies undergo in the transition to motherhood, then we need to offer a true body-mind practice to support and nurture these changes. This also matters for the babies and for all the relations that pregnant women have, starting with the families that are being created or transformed around their pregnancies and births.

Yogic breathing uniquely connects voluntary and involuntary muscles’ actions in the abdomen. By both expanding breathing capacity and stretching, women gain greater confidence and control through familiarity with their ‘birthing muscles’, that extend beyond what we usually call ‘pelvic floor’.  For first-time mothers in particular, the transformation of the vagina into a ‘birth canal’ through which their baby will enter the world, is a source of anxiety that can be alleviated with adapted yoga practice. Mula Bandha is no longer serving the ‘cult of tight’ but helps to create the elasticity that’s most needed for the release of Apana, the energy of ‘bearing down’ and letting out. This opening can then be reversed after birth with a conscious use of the breath to gradually resume Bandha practice.

Unlike other forms of birth preparation involving specific breathing or self-programming techniques, yoga does not involve an active use of memory. It relies on enlivening a deeper level of integration that our bodies instantly recognize. Even for inexperienced women, a few weeks of yoga practice is sufficient to embody the motions of ‘letting go’ to ‘give birth’, ideally in a spontaneous mode with minimal medical intervention but also to ease the process when, for any reason, this is not possible. Regular yoga practice throughout pregnancy, however, yields optimal results for postnatal recovery. The long-term wellbeing that is gained from a combination of breath and movement, dynamic and nurturing yoga practices in response to women’s felt needs month after month, is not easy to quantify. Benefits are immediately perceptible in pregnancy: a better spinal alignment and, with it, the prevention or improvement of minor ailments that affect the majority of pregnant women (lower backache, heartburn, shortness of breath and risk of pelvic instability and pain).  Because of the effect of expanded breathing on the fascia and the four layers of abdominal muscles, prevention of diastasis recti (a gap in the midline of the rectus abdominis muscle) is an important benefit since this condition is now on the increase worldwide. Breathing in relaxed, aligned stretches ‘elastify’ the lower and higher sections of this vertical ‘hammock’ muscle, often neglected in the toning of the middle three of the “six packs”. Then with every breath the attachments of this amazing rectus muscle are more alive in every move of the rib cage and the thoracic diaphragm at the top and help strengthen the front part of the pelvic floor under the symphysis pubis at the bottom. Incidentally, stretch marks can be avoided or reduced if already present.

Based on extensive research, we know that movement is key to prevent or alleviate anxiety and mild forms of depression that sadly affect many pregnant women. Adapting Asana with flow, raised sitting positions, variations on all fours for easing the lumbar curve and engaging pelvic muscles and ligaments around the sacrum, even walking and dancing Asana with grace and fun all help produce endorphins! These are linked with the ‘happy hormones’ of pregnancy and birth, among which oxytocin is most conducive to facilitate the birth process. The ‘dynamic stillness’ of Asana remains a classic peak experience for non-pregnant practitioners. But for most pregnant women as they transform, finding movement, breath and even voice in adapted Asana is paramount. The enjoyment of bodies in movement is perceived by the babies, who in turn generate positive molecules for their mothers.  This is the first of our Birthlight’s ‘spirals of joy and wellbeing’, that can be established since the first trimester of pregnancy with long term implications for babies’ brain wiring and future mental balance.

Birthlight refers to ‘birthing lightly’, free from fear or undue strain.  This actual possibility works best if we are open to life being unpredictable and medicine’s wonders when we need them.  Following the yoga principle of non-attachment to action goals, with adequate support a majority of women can envisage a gentle birth without violence to themselves or their babies. Welcoming a new baby in the world is a spiritual act. Yoga supports the ‘light’ of birth for each woman and each family in a holistic perspective.

Integrating body and mind processes is crucial in all major transitions in our lives. Prenatal Yoga lays the foundation for changing inherited harmful patterns of behaviour and thought into healthy ones so that new parents can take charge and enjoy their new lives with babies. Even if birth experiences are not the perfect ones that were dreamt and planned, trauma can be minimized by both the increased physical resilience and the inner peace that regular yoga practice generates. Postnatal Yoga aims first of all to integrate the experience of pregnancy and birth and to create a new (ideally better) balance of the Vayus. New mothers’ bodies are no longer their babies’ home: they need to be re-owned and closed. This is best done using yoga breathing and micro-movements that also contribute to stabilize the pelvic joints and re-align the sacrum and tailbone. Then the root core of women’s bodies can gain renewed strength and vitality. This is quite a different concept than just thinking about regaining a pre-pregnancy figure or resuming a yoga routine. Trying to ‘get back’ to an obsolete normality is not a productive way of engaging with what the present and the future may bring.

The Birthlight Well Woman Yoga teacher training course, like the Perinatal Yoga course and its various adjunct short courses on Fertility Yoga, Optimal Pelvic Floor Health with Yoga, as well as the Aquanatal Yoga and Therapeutic Aqua Yoga for Women, are all  rooted in the pioneering two-year training Diploma course in Yoga Therapy set up by Dr Robin Munro at the Yoga Biomedical Trust in London at the turn of the 1990s. Based on a solid understanding of anatomy and physiology and with a comprehensive overview of  mainstream interventions in obstetrics and gynaecology, the courses aim at helping students draw on the wisdom of the Ayurveda and Yoga texts with informed knowledge about current reproductive health care. Complementary approaches on psychosomatic aspects validated by neurobiological research and by experimental programs using yoga and meditation to promote wellbeing are also included. In spite of criticisms at Cochrane review level, the rapid rise of clinical trials on therapeutic applications of yoga is compelling. Besides back pain, reproductive pathologies that have not been addressed timely during pregnancy or in the postnatal years are perhaps the most urgent claims to group yoga therapy. If it takes a village to bring a baby into the world, it also takes a supportive community to address the chronic conditions such as prolapse or stress incontinence mostly ignored by conventional medical treatment. Since women make up most of the worldwide Yoga clientele, addressing the health issues they face in their reproductive cycle, both for preventing and alleviating suffering, is surely a priority in our world."

Francoise is Founder and Director of Birthlight and author of several books including ‘Yoga for Pregnancy, Birth and Beyond, ‘Baby Yoga’,  ‘Yoga for Mother and Baby Yoga’, ‘Aqua Yoga’.

The Birthlight Trust is an educational charity, with over 30 years’ experience of promoting an integrated approach to pregnancy, birth, babyhood and parenting with Yoga. www.birthlight.com